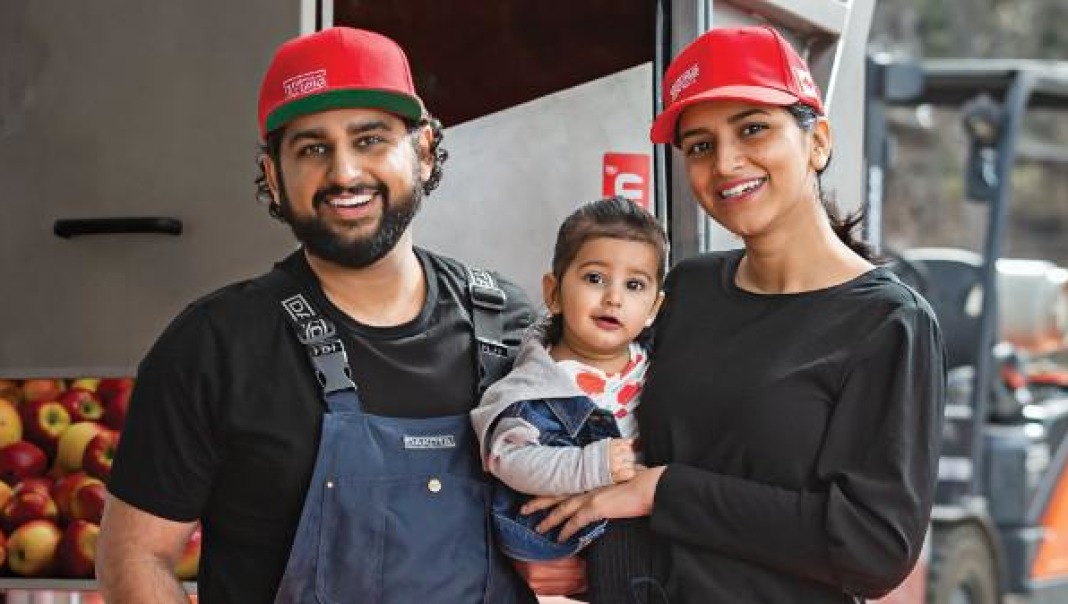 Avi Gill didn’t foresee the speed his new venture would take off at when he left being a pharmacist to return to his parents’ farm. The idea was to add value to the apples and cherries his parents have grown for 30 years, particularly as they get older and look to step back some.

“My dad, Karma, has a reputation for growing high-quality fruit, but it's difficult to create a brand for a raw commodity. Even a ‘B.C. apple’ is still an apple,” says the personable 33-year-old who grew up on his parents’ orchard but moved to Vancouver for university.

At times, Karma also had thought of finding a value-add option, but when Avi and his wife Binny discussed moving back to the farm in 2018, they made a formal business plan in-house.

“Creating a business plan was very, very important to plan where the business was going one month from now and even five years out,” Avi stresses. “We also included the current business and our current financial picture.”

Avi brought the vision and science background for product development. His parents contributed their farming and business experience, and Binny’s commercial banking background in agriculture completed the picture. Discussions that started with selling boxed fruit juice ended with creating a new beverage and obtaining a canning line.

In less than four years, Farming Karma Fruit Company has progressed from concept to a line of products and has secured shelf space in over 1,500 B.C., Alberta and Ontario stores.

The “no sugar or preservatives added” fruit soda was designed to fill a gap between artificially flavoured sodas and pure juice. It contains less sugar and calories, something consumers want.

Knowing the importance of marketing and story, they branded it Farming Karma, honouring Avi’s dad.

They borrowed a concept from the local wine industry, creating an on-farm tasting facility where customers can see farm fruit turn into the drink they’re sampling. They also gave out samples and sold at Kelowna’s Farmers Market, something Avi and Binny continue, to connect with customers and get face-to-face feedback. Ideas are recorded electronically to be recalled and discussed at regular family business meetings.

“Today’s consumers are engaged in what they purchase and consume. Information needs to be readily available through accessible channels like social media. Giving back and being integrated into our community is an important core value of who we are. As a company, we want to make clean, healthy product and really exemplify the good principles in farming — growing, giving, sharing — good Karma,” Avi explains.

While Avi credits a Kelowna independent grocery store owner for their first shot at grocery retail in 2019, that summer also included a tradeshow.

“I went to the CFIG [Canadian Federation of Independent Grocers] Grocery Showcase show in Vancouver. We didn’t belong there at this early stage, but Dad is a big advocate for marketing and said, ‘set up a booth and be yourself.’ We had a really cool booth and the Kraft reps across from me were big supporters telling others to check us out, enabling me to make connections.”

Save On Foods and Sobeys approached him at the show. Half a year later, Farming Karma was on shelves in both stores across B.C. In April 2021, Sobeys named the fruit soda the most innovative product of the year in Western Canada.

“Being a young entrepreneur and being genuine about my skill set attracted more help from others,” Avi says. He learned the basics in each area of the business, from how manufacturing equipment works to how to create marketing content. He built the company’s first website and knows when to seek professional help, like redesigning the website.

“I want to be knowledgeable enough to understand the discussion when I hire outside expertise. I’m not an expert in their fields, nor embarrassed to not know. There are so many things I didn't know how to do before starting this business.”... Read More